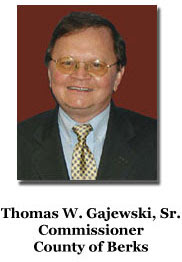 Mary Young, who covers county government and politics for the Reading Eagle, has an interesting column in today's edition previewing a televised forum for the four candidates seeking election to the Berks County Board of Commissioners.

The column centers on incumbent Tom Gajewski, who has an albatross around his neck (he supported a 34-percent property tax hike in 2005) and appears to be having trouble breathing.

It's a fascinating piece on a politician who is about to be tossed out of office. Berks County is where the Commonwealth Caucus Plan to eliminate property taxes started and there's a strong anti-tax movement in the county.

Voters swept out several state legislators in 2006 and have set their sights on Democrats who failed repeatedly to deliver on their promises to do something about property taxes: State Sen. Michael O'Pake, Rep. Dante Santoni and Rep. David Kessler. All three are vulnerable in 2008.

But this November, Gajewski must face the voters after approving that 34-percent take hike. Good luck with that. Gajewski's political future can best be compared to the film, "Dead Man Walking."

The Republican candidates for commissioner, incumbent Mark C. Scott and newcomer Christian Leinbach, appear to be in the best position to win. Scott voted against the 2005 tax hike and Leinbach not only criticized the tax increase but he has promised not to raise property taxes in the next four years.

If you want to see Gajewski unraveling before your eyes, the televised forum will be shown on BCTV Monday at 11 a.m. and Tuesday at 4 p.m., which is Channel 13 on Comcast in Reading and Hamburg, and Channel 19 on Service Electric Cable.