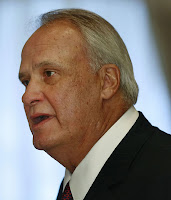 Two years, two months and four days after the Pennsylvania Legislature gave itself, the governor and the state's judges a middle-of-the-night pay raise, the chief justice of the Pennsylvania Supreme Court announced his retirement.

Don't think for one second the two incidents are not related.

Chief Justice Ralph J. Cappy said Tuesday he is stepping down at the end of the year "for personal reasons," two years before he would have faced voters in a retention election.

I wrote two years ago that Cappy would "retire" before he would have to face the voters again, but I didn't think he'd drop out this soon.

If Pennsylvania voters vote "No" on Nov. 6 to retain Judge Thomas Saylor to the Supreme Court, 4 of the 7 members of the state's highest court will have been replaced in the two years since the pay raise.

Voter anger over the 2 a.m. pay raise vote is the gift that keeps on giving.

Cappy was one of the architects of the pay raise debacle along with Gov. Ed Rendell, then-Speaker of the House John Perzel, Senate Pro Tem Robert Jubelirer and Senate Majority Leader David Brightbill.

Jubelirer and Brightbill were kicked out of office by Republican voters in the May 2006 primary. Perzel, a Republican, was ousted as Speaker in January 2007 by a new Democratic majority and a small band of Republicans. Another political bigshot, Mike Veon, the No. 2 Democrat in the House during the pay raise vote, was also voted out of office in 2006. House Majority Leader Bill DeWeese barely survived re-election in 2006.

Pennsylvania voters, angry about the pay raise and the failure in Harrisburg to deliver property tax relief, replaced 55 state lawmakers in 2006. Almost all of the ousted incumbents voted for the pay raise.

The only high-profile payjacker to survive is Gov. Ed Rendell, who signed the pay raise into law in 2005, but has apologized for the move.

The Cappy retirement and the upcoming retention vote for Saylor will be among the topics of discussion at a press conference scheduled for 10:30 a.m. Thursday in the state Capitol by watchdog groups that have been leading the fight to reform Harrisburg since the July 7, 2005, pay raise vote.

"Fairly or unfairly, the Pay Raise of 2005 will define Ralph Cappy's tenure on the Supreme Court," said Tim Potts, co-founder of DemocracyRisingPA. "At a time when Pennsylvania needed a chief justice who was straightforward with citizens and believed in using the democratic process to debate the important issue of how much to pay those who serve citizens from the bench, Cappy did not rise to the occasion. Today the entire judiciary suffers, and will suffer, because of it."

Cappy's retirement means that Ronald Castille, the most senior member of the court, moves up to chief justice, and Gov. Rendell gets to appoint a new justice to fill the remainder of Cappy's term, which expires in 2009.

Castille, who does not face a retention election until 2013, is the author of the 2006 decision allowing judges to keep the pay raise that lawmakers had repealed in 2005.

Potts, a longtime observer of the Harrisburg scene, is happy to see Cappy leave.

"Cappy's resignation comes years too late," Potts said. "Under Cappy's reign, critical sections of Article III of our Constitution (which sets forth the procedure the General Assembly must use when enacting laws) have become virtually meaningless. Rather than upholding the Constitution to protect citizens from abuses by the legislative and executive branches, Cappy embraced the back-room deal that allowed the midnight enactment of the gambling law, the midnight enactment of the pay raise and the lame-duck enactment of unlimited free alcohol for slots players, among other insults to the rights of citizens under our system of government.

To read more about the sad state of affairs in the Pennslvania judicial system, check out the Justice On Trial section of the DemocracyRisingPA Web site.