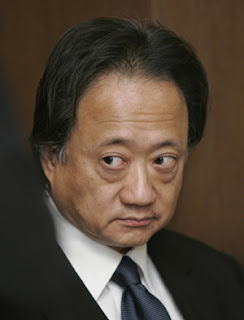 Gov. Ed Rendell, one of several high-profile Democrats who accepted campaign donations from a California fugitive, has finally agreed to give the money back. Sorta. Rendell announced today that the "media feeding frenzy" surrounding Norman Hsu has prompted him to donate $40,0000 of Hsu’s dirty money to charity.

Better late than never, Ed. Regardless of the so-called "media frenzy" over Hsu's copious donations to Democrats, giving the money away was the right thing to do. Rendell doesn't always do the right thing, especially when it comes to campaign funds.

Even Hillary Clinton, who has been involved in one financial scandal after another, agreed to sever her ties with Hsu and give back $23,000 last week.

Rendell initially refused, but got hammered by Pennsylvania newspapers and bloggers. Even the official Ed Rendell Party Organ, The Philadelphia Inquirer, published a front page article about Rendell keeping the dirty money.

After learning that Norman Hsu failed to appear in a California court on 15-year-old fraud allegations, Gov. Rendell today said that he is disappointed in Hsu's actions and that he will donate Hsu's campaign contributions to charity.

"Though Norman is my friend, and remains so, his failure to appear casts a new light on his assertions regarding the original case," Gov. Rendell said. "As a result, I will follow other elected officials and donate the money he contributed to me to charity.

"It was never about the money," the governor said. "It's about standing up for one of the principles of our judicial system -- that a person is presumed innocent until proven guilty.

"The media feeding frenzy around Norman is likely to continue, but I intend to focus now on the tremendous amount of work we have to complete in Harrisburg this fall for the people of Pennsylvania."

The Pittsburgh Tribune-Review has an excellent editorial today about The Hsu Affair and Gov. Rendell's poor judgment in friends.