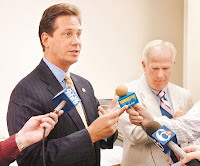 Is Jim Matthews trying to throw the Nov. 6 election?

It's beginning to look that way as the incumbent Republican Montgomery County Commissioner proves once again to be his own worst enemy.

With the election just six weeks away, Matthews is keeping the fading Democratic Party challengers alive by continuing to accept money from convicted felon Bob Asher.

Matthews' bonehead loyalty to Asher is giving his Democratic opponents, Joe Hoeffel and Ruth Damsker, plenty of ammunition as they try to take control of the three-member Board of Commissioners.

Hoeffel and Damkser haven't had much success in attracting support with their raise taxes/make government bigger agenda, but they keep scoring points every time they point out that Matthews is funded by Asher.

Read today's edition of The Times Herald for more on the ongoing controversy.

The person you feel sorry for is Bruce L. Castor Jr., who is giving up his post as Montgomery County District Attorney in a valiant effort to keep Republican control of the commissioners' board.

Castor made it clear from the start that he wanted nothing to do with Asher (or his puppet, county GOP Chairman Ken Davis). Castor managed to push Republican Commissioner Tom Ellis, another Asher supporter, out of the race. But Montgomery County Republican Party Committee members would not support Castor's hand-picked running mate and instead endorsed Matthews to run with Castor.

It was a shotgun wedding that appears to be unraveling as we get closer to Election Day. If the party leaders knew now what they didn't know then -- that Matthews would continue to take money from Asher -- GOP Committee members would have dumped Matthews in favor of a Bruce Castor-Melissa Murphy Webber team.

Return every dime you got from Asher, keep your distance from Asher, and listen to Castor, who has more political sense in his little pinkie that you do in your entire body.

If Montgomery County Republicans want to keep control of county government, they better wake up and insist that Matthews ditch Asher, who should do the party a big favor and leave Montgomery County until after Election Day.

Take a hint from the photo above, with Castor on the left and Matthews in the background. The best thing Matthews can do for the Republican Party is stand next to Castor at campaign stops and press conferences and say nothing. Let Castor to do all the talking until the ballots are counted on Nov. 6.

Otherwise, Republicans will wake up on Nov. 7 to Joe Hoeffel, an Ed Rendell-crony as the next chairman of a Democratic-controlled Board of Commissioners. And if that happens, no amount of money from Asher will get Republicans back in control of county government.