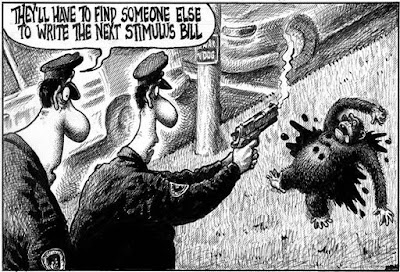 This is the editorial cartoon by Sean Delonas published in the New York Post that has caused such an uproar.

"I question the judgment of the editorial editors to move this to print as well as the diversity of its staff that would let them think this passes as comedy," said Barbara Ciara, president of the National Association of Black Journalists and vice president of UNITY: Journalists of Color.

Read more from the groups at the links below:

This cartoon is offensive to chimps. There should have been two doo-doo birds named Nancy & Harry