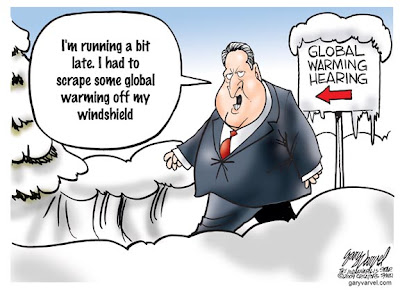 How's this for Cosmic Karma?

A $280 million satellite designed to monitor global warming from space crashed today shortly after takeoff from Vandenberg Air Force Base on California.

Taxpayers took a bath on the NASA mission, but $280 million is pocket change compared to the cost of the global warming hoax perpetuated by Al Gore and other far-left extremists.

There's a terrific editorial in today's edition of Investor's Business Daily exposing many of the lies the global warming hysterics have been spewing for years.

"The global warming speculation has more holes in it than Al Gore's oversized carbon footprint has square miles. Deeply infected with statistical and common sense problems, the climate change argument is beginning to crumble," the newspaper writes. "Doom has been overdone."