Taming the beast that is the Pennsylvania Legislature 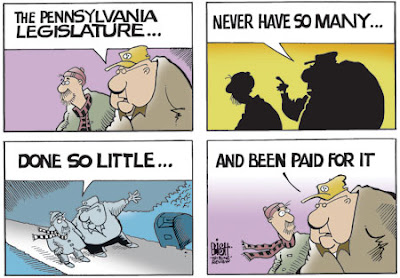 Brad Bumsted, writing in The Pittsburgh Tribune-Review, says the only way to rein in the out-of-control expense of the Pennsylvania Legislature is to take an ax to the beast.

In addition to the 253 full-time elected lawmakers, there are more than 3,000 staff members who work for the Legislature, creating a huge, costly and unproductive bureaucracy the siphons more than $300 million a year from the state treasury.

"We have the second most costly General Assembly and yet we are the sixth-largest state with a population that's at best stagnant and, relative to other states, shrinking," Bumsted writes. "Reducing the size of the Pennsylvania Legislature was snubbed by the Reform Commission two years ago. There are pitfalls to be sure but there is no better time than now to revisit it."

The enormous size of the Legislature prevents the people's business from being done, Bumstead writes.

The Democrat staffer answers to his Democrat masters. The GOP staffer reports to a GOP boss. It's why there's so much partisan bickering in the place.

It's reasonable for leaders to have partisan staff. They are elected by separate political parties and have their own vastly different ideas. But lawyers? One legal staff could serve the General Assembly like in New Jersey.

Here, each caucus also routinely hires private law firms for specialty issues, like the state attorney general's investigation into legislative corruption. Why are we paying so many high-priced outside lawyers -- and consultants like Casey?

Photographers and writers? One public relations unit should serve them all, not a separate staff for four caucuses churning out glowing news releases and newsletters at your expense.

Read the full column, "Shrink the beast," at the newspaper's Web site.