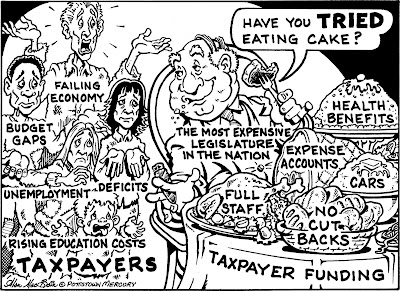 Philadelphia Daily News columnist John Baer, who has covered Harrisburg for decades, is having a difficult time understanding why members of the Pennsylvania Legislature, already among the highest-paid in the country, need to keep so many high-paid staffers around.

The Pennsylvania Legislature is already the most expensive in the nation, with an annual cost of $334 million, according to Baer.

In addition to 253 elected lawmakers, the Legislature employs 3,156 staffers, Baer says. Base pay for rank-and-file lawmakers is $78,315, but the job, with perks and benefits, is really six figures, Baer writes.

I never understood why the sixth-largest state needs the largest legislature (technically, New Hampshire's is larger, but part-time; its 424 lawmakers are paid $100 a year), especially given the legislature's performance, venality and, if you believe the state attorney general, level of corruption.

I sure don't understand why we need the largest staff - especially as thousands of regular state workers face layoffs.

Our bloated Legislature has a bloated underbelly.

Read the full column, "Our state lawmakers are tops ... when it comes to staff numbers," at the newspaper's Web site.