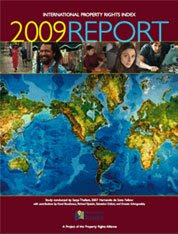 From Kelsey Zahourek, executive director of the Property Rights Alliance (PRA), on the release of the group's 2009 report:

"With regard to private property rights, PRA continues to champion the idea that physical and intellectual property are equally important in nature, and must be protected. Property rights contribute to increased levels of stability and provide people with the knowledge and comfort that their property will remain theirs. As property rights continue to face challenges around the world, we hope this study will be a useful tool for policymakers, think tanks, academics, and investors by highlighting the importance of property rights as a key building block for economic growth."

So who comes out on top when it comes to protecting property rights?

You might be surprised to learn that it is not the United States, which didn't even make the Top 10.

From the report, which ranks 115 nations:

Finland leads the country list a third year in a row with an increased score from the previous two years of 8.7 out of the possible 10.

At the bottom end of the ladder of the ranking are Albania, Nigeria, Paraguay, Azerbaijan, Bosnia-Herzegovina, Chad, Venezuela, Guyana, Burundi, Zimbabwe, Angola and Bangladesh.

The United States ranked 15th on the list, tied with the United Kingdom. (And this report was done pre-Obama. Can't wait to see how much the U.S. drops in next year's list.)

You can download the full 80-page report by following the link below: