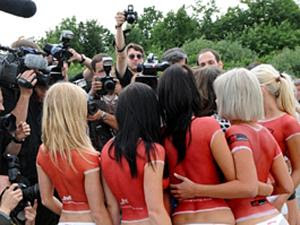 I tried watching a soccer game the other day. It was some European championship game between Greece and Russia. Even though I was rooting for my fellow Hellenes, I lost interest in less than five minutes. That's always been the problem with soccer. It's boring.

Somebody has come up with a sure-fire way to fill the stands for a soccer game. The teams were all-female ... and played the game ... topless.

The team from Austria defeated the team from Germany 10-5, but I have a feeling everyone in the audience went home happy.

The soccer players wore thongs and bodypaint. If you're familiar with Sports Illustrated or Playboy, you know all about bodypaint. It gives the illusion of clothing but it's not really there.

I'm not making any of this up. I read about it in The Philadelphia Inquirer, so you know it's legitimate news.