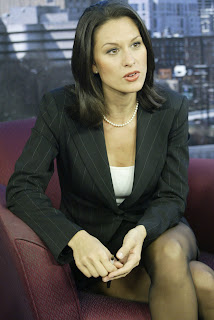 The Latina Bombshell has struck again.

Alycia Lane, former newsreader at CBS 3 in Philadelphia and a woman who has a habit of making the news instead of just reading it on TV, has filed her long-threatened lawsuit against her former employer.

Lane lost her $700,000-a-year anchorwoman job earlier this year after she was arrested in New York City for allegedly punching a female cop. (Most of the serious charges have already been dismissed, although the case has not been resolved yet).

That incident followed an earlier one in which she e-mailed bikini photos of herself to a former male colleague. The man's wife intercepted the photos and all hell broke loose. Lane, whose nickname is "The Latina Bombshell," also made a tearful appearance on Dr. Phil to talk about her divorce.

Both Philadelphia newspapers are all over the lawsuit.

It's the cover story in the Daily News, which appropriately, is a tabloid.