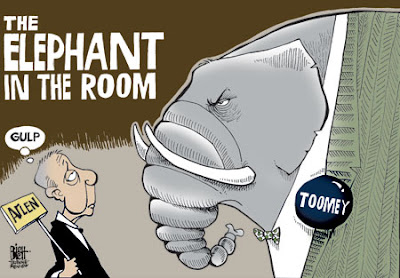 Specter's only option for retaining his Senate seat is to switch his party affiliation to Democrat. The question is, would the Democrats take him back?

Well, I guess we found out the answer today.

"Let's be honest: Senator Specter didn't leave the GOP based on principles of any kind. He left to further his personal political interests because he knew that he was going to lose a Republican primary due to his left-wing voting record. Republicans look forward to beating Sen. Specter in 2010, assuming the Democrats don't do it first."

Keep this in mind, also from my earlier post:

Pennsylvania is trending blue and the Democrats could win the Senate seat without Specter, so why take a GOP retread when the Dems could run a younger, more liberal candidate. If Specter can wheel-and-deal his way to the Democratic Party nomination, it sets up a November 2010 showdown between Toomey and Specter. And that's a toss-up.

Avoiding a primary fight against the GOP's Pat Toomey is not the end of Specter's problems.

Can Specter win the Democratic primary in 2010? Stay tuned.