Prediction: Specter will step aside for Rendell 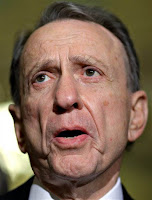 If you didn't catch Thursday's "Talking Politics with Tony Phyrillas and Mike Pincus," you missed a lively discussion about the future of Sen. Arlen Specter.

Mike and I agree that Specter is finished in the Republican Party. If he runs for re-election in 2010 as a Republican, Specter will lose in the GOP primary, most likely to former Congressman Pat Toomey, who came close to knocking off Specter in 2004.

Mike gave two good reasons why Specter can't win, even though he's the incumbent and has a ton of money. First, Specter has lost all support in the Republican Party even from the pragmatic party officials who held their nose and supported Specter despite his tendency to vote with Democrats. Second, most of the "moderate" Republicans who supported Specter in the past left the party in 2008. They are now registered Democrats or independents and are unlikely to switch their party affiliation back to Republican so they can vote in the 2010 GOP primary. Specter's base is gone.

Specter's only option for retaining his Senate seat is to switch his party affiliation to Democrat. The question is, would the Democrats take him back? Pennsylvania is trending blue and the Democrats could win the Senate seat without Specter, so why take a GOP retread when the Dems could run a younger, more liberal candidate. If Specter can wheel-and-deal his way to the Democratic Party nomination, it sets up a November 2010 showdown between Toomey and Specter. And that's a toss-up.

But there's another scenario, one that Mike and I believe is more probable. Specter will not seek re-election in 2010. This would go a long way in explaining why he betrayed the Republican Party and supported Obama's trillion-dollar bailout plan.

Specter can bow out of the 2010 race by citing health reasons (not to mention that he'll be 80 by the time the election rolls around).

This clears the way for Pennsylvania's worst nightmare. Gov. Ed Rendell will probably succeed Specter in the U.S. Senate seat.

Rendell did say after his 2006 re-election to a second term as governor that it was his last political campaign, but Rendell has lied before.

And despite the damage Rendell has done to the state during his failed tenure as governor, he's still popular enough with Democrats (and the Specter RINOs) to easily win the Senate seat. Bob Casey Jr. and Ed Rendell reunited in the Senate. Oh, the horror.