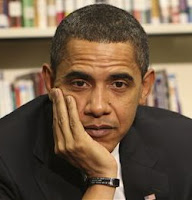 The New York Post has compiled a list of 100 mistakes made by Barack Obama in his first 100 days as president.

Why stop there? These are the 100 mistakes we know about. This has turned out to be the most secretive administration since Nixon occupied the White House. And then you have the mainstream media working overtime to cover up Obama's incompetency.

Can this nation survive another 1,365 days of an Obama presidency?

I dare Obama supporters to look at the list and refute a single item. It's time to put down the Kool Aid, stick your head out of the sand and admit what a monumental mistake was made on Election Day.

I guess “velocity is a virtue”, as has been said about Obama... when you’re trying to ram a radical agenda down the throats of a economically shell-shocked populace before they wake-up to what you’re doing. And what Obama is doing is dismantling everything that made America great… in the name of his wacked-out Marxist-professor mentors.

Only a fool would cheer programs with no historical precedent of success like astronomical pork-barrel spending (while borrowing ALL of the money from communist China), a Jimmy Carter-esque pacifist foreign policy steeped in appeasement, embracing scum like Hugo Chavez while insulting traditional allies… and Obama & Co. display a pattern of dishonesty that is troubling- and that's putting it politely.

Check back with us in a year- when people start to come out of the ether after a couple international embarrassments and 10% inflation from the reckless print-money spending-spree that The One if foisting on us.

In three years, people will wince at the very mention of the name "Obama"- and the GOP could win 40 states running Gilbert Gottfried.