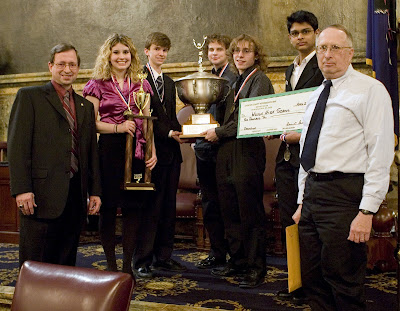 Rep. Sam Rohrer (left), Coach John Magala (right) and the students from Wilson High School had their picture taken on the House floor following the team's victory in the statewide Pennsylvania Academic Competition on Friday. After winning the event, which Rohrer hosted on behalf of the Pennsylvania House of Representatives, the Wilson High School team will represent Pennsylvania at the National Tournament of Academic Excellence (NTAE) to be held at Disney World in Florida in June.

A team of students from Wilson High School in Berks County today won the statewide Pennsylvania Academic Competition hosted by Rep. Sam Rohrer (R-Berks) on behalf of the Pennsylvania House of Representatives, earning the team an opportunity to compete at this year's National Tournament of Academic Excellence (NTAE) to be held at Disney World in Florida in June.

"I am extremely proud of the Wilson High School students and praise them for earning the state championship," Rohrer said. "At the same time, I congratulate all of today's competitors for a tremendous job well done."

Students from across Pennsylvania traveled to the state Capitol today to participate in the 18th annual Pennsylvania Academic Competition. Earlier this week, the House unanimously approved a resolution introduce by Rohrer marking the week of April 20 through April 24 as "Pennsylvania Academic Competition Week." The week concludes with the statewide academic competition, which took place today. Chester County Intermediate Unit organizes the event, which Rohrer has hosted for the last 11 years.

The students competed based on their knowledge in the following areas:
· Literature, fine arts and grammar.
· World history and geography.
· American history, geography and economics.
· Science.
· Contemporary events.
· Potpourri (any subject).

"I was pleased to play a part in this competition again this year, wish our students from Wilson High School good luck in the national competition and look forward to doing it all over again next year," Rohrer said.

Thank you for another fantastic blog. Where else could I get this kind of information written in such an incite full way? I have a project that I am just now working on, and I have been looking for such information¡­ Regards¡­