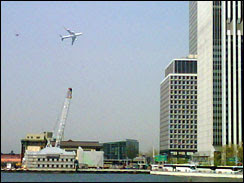 The mayor of New York is furious that the Obama Administration would send a low-flying jumbo jet trailed by jet fighters into the area near Ground Zero on Monday.

The last time New York resident witnesses something like this was on Sept. 11, 2001, when 3,000 people died in the terrorist attacks launched by Muslim fanatics.

I'm not sure which is worse. The error in judgment of Obama officials in staging a publicity event reminiscent of the worst terrorist attack in U.S. history or wasting hundreds of thousands of taxpayer dollars to do it.

Either way, it shows how incompetent and insensitive the Obama administration is.

Can someone who voted for Obama explain which case we're dealing with here? Incompetence or uncontrolled arrogance? Was this the best use of taxpayer dollars at a time when so many Americans (you know, the little people Obama was supposed to help) are out of work or struggling to make ends meet.

For another perspective on Obama's mock attack on the city, see Bluftooni.

And check out video of panicked civilians at the YouTube video below. I wonder how many of them voted for Obama.