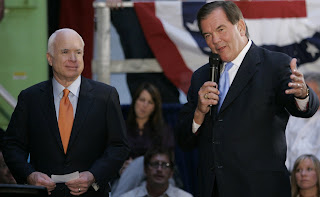 A lot of speculation about what the defection of Arlen Specter to the Democratic Party will mean for the 2010 Pennsylvania Senate race.

While conservative Republicans are backing former Congressman Pat Toomey, there's still some doubt about Toomey's ability to win in the General Election.

Bill Pascoe, writing at CQ Politics, suggests the GOP establishment that has backed Specter for the past 25 years, will soon be looking for an alternative to Toomey.

"The moderate-to-liberal David Brooks-reading Republicans who form the core of the Pennsylvania GOP establishment aren't about to hand over their U.S. Senate nomination to the conservative Toomey," Pascoe writes. "There's too much at stake, and it has little to do with a seat in the U.S. Senate."

But I'm willing to bet there's a bigger play about to unfold -- a call to former two-term Gov. Tom Ridge.

Ridge is a serious man, who left a serious footprint.

I'm not sure Pascoe realizes Ridge moved out of Pennsylvania years ago, but there's no denying Ridge is a proven vote-getter, having won two terms as Pennsylvania governor before resigning to become the nation's first Secretary of Homeland Security.

After the disastrous administration of Democratic Gov. Ed Rendell, who has left Pennsylvania in a fiscal hole of historic proportions, Pennsylvania residents will be looking to elect a Republican governor in 2010. And with the Democratic majority in the state House dogged by the biggest corruption scandal in the state's history, voters may end up sending a Republican majority to the Legislature, too.

The reason the top-of-the-ticket U.S. Senate race is so important is that redistricting will occur after the 2010 Census and that means the party in power in Harrisburg will get to redraw Congressional and Legislative seats.

With so much at stake, Pascoe argues the GOP party bosses will not take a chance on Toomey. They would rather have a "moderate" like Tom Ridge, somebody closer to Arlen Specter, who has held the Senate seat since 1981.

While many Pennsylvania GOP figures harshly criticized Specter for his defection to the Democratic Party, Ridge released a wishy-washy statement praising Specter: "In no way does his departure from the Republican Party diminish his long record of service to his country and to the Commonwealth of Pennsylvania."

It sure sounds like Ridge and Specter have a lot in common.

Ridge would attract independents and Democrats and would negate any appeal the 80-year-old Specter would have with many of those same Pennsylvania voters. In other words, Ridge would mop the floor with Specter.

But is he willing to move back to Pennsylvania? And could he beat Pat Toomey in a Republican primary?