Ted Nugent on Obama: 'Has it only been 100 days? It seems like years' 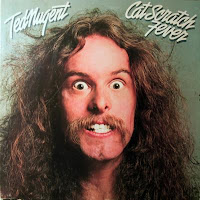 Political pundits everywhere are weighing in on Barack Obama's first 100 days in office.

You probably won't come across a more entertaining analysis than the one offered by guitar hero-turned activist Ted Nugent.

From his column at HumanEvents.com:

Harry Truman had a sign on his White House desk that said "The Buck Stops Here." If Barry Obama (BO) decides to place a sign on his desk in the oval office, I recommend he go with something such as "Do Not Point Me at Anything You Do Not Wish to Destroy."

With the exception of me armed with a guitar snarling and howling in Motown delight, I can't think of another destructive force on the planet as powerful as BO and his Democratic cohorts in Congress. BO's list of destruction in the first 100 days of our sentence to be governed by him is staggering.

If this is kind of hope and change you wanted, you will get plenty more of it. And then the bill will come and we can all play dumb.

Has it only been 100 days? It seems like years. And just think about this: we’re in for another three years and 265 days of this unless some Republicans get a spinal transplant. Can someone please send them a few thousand bottles of testosterone pills?

Read the full column, "It Seems a Lot Longer," at HumanEvents.com