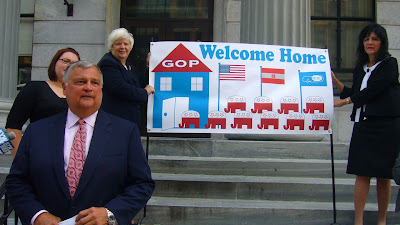 Montgomery County Republican officials hope the "little elephants" return home, says reporter Carl Hessler Jr., who has a story in today's edition of The Mercury about the launch of a major voter registration drive.

Robert J. Kerns, the new chairman of the county Republican committee, wants to entice former party members who may have switched their party registrations to cast ballots during the Democratic Primary contest in April to return to the GOP fold, Hessler says.

"Part of this registration program is to bring home all those people who have kind of lost their way, if you would, and we hope the little elephants decide to come back to the GOP again," Kerns told Hessler during a news conference on the steps of the county courthouse in Norristown.

"We tell them, it's time to come home, little elephants. We think that we have the perfect home for you," added Kerns, surrounded by members of the party faithful who held a red, white and blue banner that said, "Welcome Home."

The registration drive will include a team of voter registrants going into communities throughout the county to get voters registered, as well as an opportunity for voters to request voter registration forms online at www.montcogop.com, according to Hessler.

The registration drive comes at a time when Democrats have made an inroad in the voter registration rolls, Hessler notes.

The Democrats, who have been winning an increasing number of elections for state House and state Senate seats and congressional seats also had another first when their candidates grabbed five of the nine county row office positions (elected department heads) in last November's elections.

Read the full story on the GOP voter drive in The Mercury.