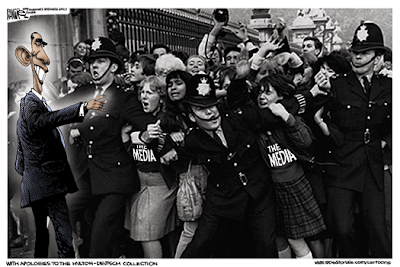 Still need convincing that the mainstream media is overrun with liberals?

Since less than 50 percent of registered voters are Democrats, how is it that journalists would favor one party over the other by a ratio of 100-1? Could it be that liberals in overwhelming numbers have control of the news media?

From his op-ed piece, "Putting Money Where Mouths Are: Media Donations Favor Dems 100-1" --

An analysis of federal records shows that the amount of money journalists contributed so far this election cycle favors Democrats by a 15:1 ratio over Republicans, with $225,563 going to Democrats, only $16,298 to Republicans.

Two-hundred thirty-five journalists donated to Democrats, just 20 gave to Republicans — a margin greater than 10-to-1. An even greater disparity, 20-to-1, exists between the number of journalists who donated to Barack Obama and John McCain.

Searches for other newsroom categories (reporters, correspondents, news editors, anchors, newspaper editors and publishers) produces 311 donors to Democrats to 30 donors to Republicans, a ratio of just over 10-to-1. In terms of money, $279,266 went to Dems, $20,709 to Republicans, a 14-to-1 ratio.

And while the money totals pale in comparison to the $9-million-plus that just one union's PACs have spent to get Obama elected, they are more substantial than the amount that Obama has criticized John McCain for receiving from lobbyists: 96 lobbyists have contributed $95,850 to McCain, while Obama — who says he won't take money from PACs or federal lobbyists — has received $16,223 from 29 lobbyists.

Is there a liberal media bias? Is the sky blue? Is Al Gore making a ton of money from global warming hysteria? Yes, yes and yes.

The New York Times' refusal to publish John McCain's rebuttal to Barack Obama's Iraq op-ed may be the most glaring example of liberal media bias this journalist has ever seen. But true proof of widespread media bias requires one to follow an old journalism maxim: Follow the money.

Even the Associated Press — no bastion of conservatism — has considered, at least superficially, the media's favoritism for Barack Obama. It's time to revisit media bias.

True to form, journalists are defending their bias by saying that one candidate, Obama, is more newsworthy than the other. In other words, there is no media bias. It is we, the hoi polloi, who reveal our bias by questioning the neutrality of these learned professionals in their ivory-towered newsrooms.

Read the full column at the IBD Web site.