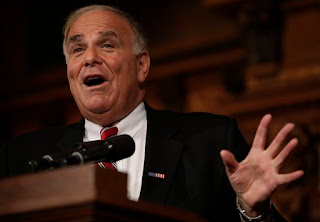 I have this image in my head of Gov. Ed Rendell, dressed in leather bondage gear and carrying a whip, preparing to go medieval on Pennsylvania taxpayers. I may need professional counseling to get over this.

Rendell proclaimed Thursday at a news conference "there will be universal pain" because the state is facing a $2.3 billion budget deficit.

This is the same governor who last July was getting high-fives from legislators after they agreed on a $28.3 billion spending plan for the 2008-09 fiscal year.

Despite warnings from a handful of Republican lawmakers and the state's leading think tanks that the budget would soon drown in red ink, Rendell and the Legislature stuck their heads in the sand ... and then went on vacation.

Rendell's plan for digging out of the massive hole he put us in is to ask the Legislature to give back most of the $200 million slush fund it siphoned from the state treasury in recent years, laying off state workers and waiting for Barack Obama to bail the state out with a few billion dollars he has laying around.

But this would stop the bleeding only for the 2008-09 fiscal year, which ends June 30. The 2009-10 budget would start off with that very same $2.3 billion deficit that has to be made up with deeper spending cuts or raising taxes.

This is the culmination of Rendell's failed fiscal policies over the past six years. He has increased state spending by nearly $8 billion, borrowed billions more and has nothing to show for all that spending except a fiscal crisis not seen in this state in decades.

"There will be some layoffs and there will be universal pain," Rendell said at the news conference. "I don't want to hear whining. I think everyone has to tighten the belts."

Tough talk from a tax-and-spend liberal who squandered $8 billion since taking office in 2003. Imagine if Ed Spendell had returned that money to Pennsylvania taxpayers and businesses instead of handing most of it out to political cronies.

Imagine if Rendell hadn't screwed up the awarding of casino licenses that could have brought significantly more revenue into state coffers. Instead of offering the state's slot parlor licenses to the highest bidder, Rendell's gaming commission awarded the contracts at a fixed price to casino operators, shortchanging the state by hundreds of millions of dollars.

Imagine if Rendell hadn't awarded more than $1 billion in no-bid contracts to lobbyists and politically-connected firms. Just imagine if the Legislature had the backbone to stand up to Rendell's out-of-control spending.

Rendell is sounding like a Republican these days. He actually used the term "zero-growth budget" when asked about the 2009-10 budget. Conservative Republicans have been pushing for "zero-growth" budgets for years, but Rendell and House Democrats have ignored their pleas.

When asked about cutting state programs, many of which he created, Rendell said: "Some of them deserve to be eliminated and probably should be eliminated forever."

Who is this man and what have they done with the real Ed Rendell?

Rendell ruled out an increase in the state income tax, unless the Legislature wants to raise taxes. Yeah, right. All 203 members of the House face the voters every two years. Half the Senate is up for re-election in 2010.

How many incumbents will stick their political necks out and vote to raise taxes? Rendell has two years left in his term and has said he will not run for political office again.

"The Legislature could pass one, but I am not going to submit a budget on Feb. 4 that has a broad-based tax increase in it," Rendell said.

I never thought I'd live to see the day Rendell would say he won't try to raise taxes.

Harrisburg insiders defend the leadership accounts as a hedge against tough times when the governor might squeeze lawmakers to get what he wants. Welcome to those tough times.

A spokesman for House Minority Leader Sam Smith, R-Jefferson, told The Associated Press that the Legislature needs to keep a four-to-six-month reserve to maintain its independence. "Beyond that, we are willing to turn over, to turn back" the unspent funds, spokesman Steve Miskin said.

Rendell might twist enough arms to get the Legislature to hand over some of the money but don't bet on lawmakers giving the entire $200 million back, especially with the state Senate solidly in Republican hands for the next two years.

Isn't this revenue shortfall close to the same sum that our illustrious Gov. would have raised HAD he tolled interstate 80 and raised the Turnpike tolls. Even a commoner like myself knew that the tolling of 80 would never occur.

Oh by the way Ed when does the massive amount of revenue generated by the Casinos begin to LOWER my property taxes.

When is the Gov and company going to offer an incentive to the older and more expensive state workers to get them off the rising payroll and into the SERS on a fixed income?? This allows you to hire a lower wage paid replacement.

There's only two more years of this nonsense left to go folks.

Dan Surra, I take it your not a former de-throwned state reprehensible that "Eddie giveaway" created that job for in these hard times that we his children are not permitted to whine about

Tony, It is the same "Renny" from U of P. I remember him well. He was first in our class at clown school.