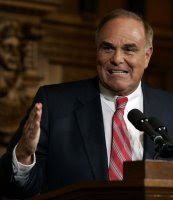 Gov. Ed Rendell promises "universal pain" for Pennsylvania residents as the state's fiscal crisis deepens to include a $2.3 billion budget deficit for the current fiscal year. The governor said he doesn't want to hear any whining as he prepares to sit down with the Legislature to slash programs and lay off state workers.

Easy for him to say. Rendell still has a well-paying job for another two years. That's more than you can say about tens of thousands of Pennsylvania residents who have lost their jobs or will soon be standing on the unemployment line.

An editorial in The Mercury asks if Rendell and the Pennsylvania Legislature will be "sharing the pain" they are about to inflict on Pennsylvania taxpayers thanks to years of fiscal management.

The question ... is whether they will spread the pain into their own legislative chambers or continue with business as usual while services and agencies are dealt cutbacks.

The Pennsylvania Legislature is the most expensive state lawmaking body in the nation. The number of legislators, the level of their salaries and the glut of staff, field offices and administrative expenses last year cost the taxpayers $315 million.

Considering the lack of progress on such pressing matters as tax and school funding reform, legislators would have a tough time justifying $315 million to the citizens of Pennsylvania.

With the exception of passing on a cost-of-living pay raise, Pennsylvania lawmakers continue to draw salaries and benefits the average Pennsylvania workers can only dream about.

More from the editorial:

Pennsylvania legislators need to take a long look in the mirror as they begin this difficult session in Harrisburg. The "pain" that Rendell speaks of must include questioning their own efficiency, the number of legislators and the pay they collect. But, reducing the size of the Legislature is a constitutional question that would take some time.

Meanwhile, there is nothing to prevent reducing the number of offices, eliminating administrative staff and slashing the unnecessary perks that include gifts to constituents which serve only to boost future re-election chances.

Lawmakers' benefits, from transportation reimbursement to health care, should be analyzed for savings. The state of the economy has written a new set of rules; it's time legislators adapt to them as well.

The difficulty in Harrisburg is that no one can make this happen except the lawmakers themselves. And, who in the end, votes themselves a cut in pay or benefits or office help?