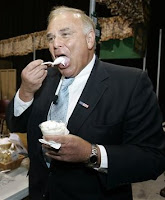 Pennsylvania is facing a fiscal crisis with a projected $2.3 billion budget deficit. Some state lawmakers have called state finances an economic disaster.

So are state leaders doing to address the crisis?

The Legislature has been on vacation since last October and Gov. Ed Rendell has been moonlighting as a TV analyst after Eagles games. In other words, it's business as usual.

Another indication that Rendell and lawmakers are living in la-la land is the fact that Rendell has postponed his annual budget address to the Legislature by a day in anticipation of a Steelers' Super Bowl win.

Rendell will deliver his annual address on Feb. 4 to allow time for Steelers fans to return from Florida and hold a victory parade on Feb. 3.

Rendell will be attending the Super Bowl on Feb. 1, according to a spokesman. He will probably find his way to Pittsburgh on Feb. 3 if the Steelers win.

So let's continue to fiddle while the state burns.

To be fair, a handful of Republican lawmakers have proposed swift action on the state's fiscal crisis: See Taxpayer Protection and GrassrootsPA for more.