Newspaper: Obama is a cheapskate 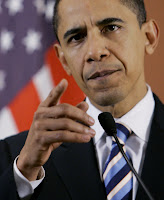 "Barack Obama would 'spread the wealth' as president, but until lately the Obamas were giving less than 1% of their own high incomes to the needy and neglecting even poverty-stricken blood relatives," says Investor's Business Daily, which has found another serious character flaw in the would-be president.

From an editorial in Investor's Business Daily:

Sen. Barack Obama is apparently quite a cheapskate when it comes to giving to charity. From 2001 to 2004, the tax returns for Mr. and Mrs. Ebenezer Obama show less than $8,500 in donations out of the nearly $1 million they made.

In 2005 and 2006, with book royalties making them millionaires, their charitable contributions rose to about 5% of income. But how "charitable" are some of the causes Obama supports? In 2006, for instance, he gave more than $20,000 to the notorious Rev. Jeremiah Wright's Trinity United Church of Christ in Chicago.

Imagine that. Giving tens of thousands of dollars to someone who preaches "not God Bless America; God damn America!" from the pulpit. It remains incomprehensible that John McCain chose not to hammer home Obama's close association with Wright. The Wright issue has nothing to do with race, and everything to do with radical ideology.

Read the full editorial, "All Charisma, No Heart," at the newspaper's Web site.