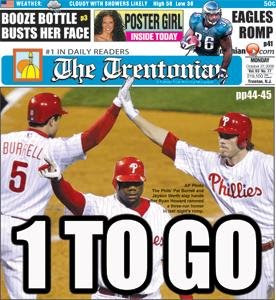 Baseball could crown a new champion tonight if the Philadelphia Phillies beat the Tampa Rays. The Phightin' Phils hold a 3-1 series lead. Teams leading 3-1 after four games have an 85% chance of taking the Series.

Phillies fans would like to wrap it up tonight at home instead of sending the series back to Tampa. Go Phillies!