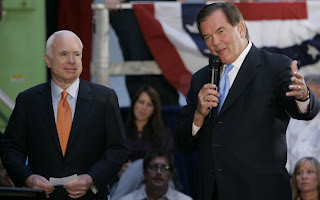 From Smerconish's column in The Philadelphia Inquirer:

Make no mistake: Sen. Joe Biden was a prudent pick. Senator Joe has the seasoning and foreign-policy experience that Obama lacks.

He has overcome personal adversity to lead an impressive career. He's both intelligent and telegenic. He's scrupulous. And he has the common touch.

Perhaps most important is this: Biden is an asset in the bellwether Philadelphia suburbs, which will decide Pennsylvania and possibly the nation.

The man who rides Amtrak home to Delaware after a day of Senate business is sometimes referred to as Pennsylvania's third senator, both for his continued proximity and his Scranton roots.

Selecting Biden was Obama's play for Pennsylvania by way of the Philly 'burbs, and it's a good one.

But by making that play, Obama has given McCain the political cover he needed to respond with his best available pick:

Ridge has much to offer McCain. From public housing to Harvard, his narrative is ready for the history books: He's a Vietnam veteran, a former U.S. representative and governor, and the first secretary of the Department of Homeland Security.

And to top things off, he is an abortion-rights advocate.

Yes, I am including that position as an attribute for the ticket - mainly because the very people McCain needs to reach are pro-choice.

I do think whoever wins Pennsylvania will end up winning the presidency, so a McCain-Ridge ticket could be the GOP's best chance to hold the White House.

Read the full column at the newspaper's Web site.

Absent the pro-choice factor, my biggest problem with this pairing is the political hay that the Obama camp will make of pairing two war veterans with strong defense backgrounds, great foreign policy experience (especially anti-terrorism), but little to no domestic expertise.