Is Sarah Palin for real? 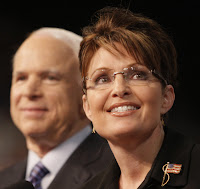 I'm trying to gather information about Sarah Palin. I'm amazed at this woman's accomplishments and her background.

She's a fiscal and social conservative and a woman who has succeeded in a man's profession (politics) at a young age. In 2006, she became the youngest person ever elected governor of Alaska at age 42.

Born in Idaho, her parents were working-class people. Her mother was a school secretary and her father was a high school teacher.

Sarah Palin, 44, is married to Todd Palin, a commercial fisherman who works in the winter one one of Alaska's oil fields.

Palin is the mother of five children, two boys and three girls.

Her oldest son serves in an Army infantry brigade scheduled for deployment in Iraq on Sept. 11. Her youngest son, born this April, has Down syndrome. She had the baby even though pre-natal testing determined he would be born with Down syndrome. She solidly pro-life.

She hunts and fishes. She even rides a snowmobile.

This is somebody who actually lived in the real world, unlike Joe Biden, a professional politician and Washington insider.

Palin ran for governor on a reform platform and by most accounts has carried through on her campaign promises.

Damn, I'm definitly voting for her !!!

Sarah Palin is a power monger who would do anything to get that #1 spot. I am afraid if they let her moose-hunting desperate housewife wannabe butt in the White House she will poison Mccain if not give him a heart attack by uncovering all her skeletons (lies)to the media. She is not the mother of that little ugly baby. She is not the mother of any children. They "mother" themselves! Their Myspace pages tell it all! http://roseburner.blogspot.com
She is a failure as a person and a failure as a leader in general.