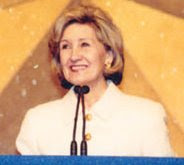 The man who helped get Bill Clinton elected has a slam-dunk strategy for John McCain to win the White House this November: Pick a female running mate, specifically Sen. Kay Bailey Hutchinson of Texas.

From a column Morris and partner Eileen McGann wrote after Barack Obama announced his veep pick:

Biden was the best of the names on Obama's short list. His experience in foreign affairs, his tough advocacy of the Democratic agenda, and his skill at handling himself will all help Obama's campaign, but not decisively.

But the most important thing is that Obama did not choose a woman. He needed one.

Now, John McCain can take advantage of Obama's blunder by coming back with a female nominee for vice president. Texas Sen. Kay Bailey Hutchison would be an excellent choice. She's been around for decades and is not going to start making mistakes now.

Her nomination would be a signal to American women that McCain takes their aspirations seriously, even if Obama does not.

I have previously written about the advantages of Joe Lieberman for vice president. His nomination would send a signal of bipartisanship which would be notable and would hasten Democratic defections. But conservatives would be horrified.

Obama's failure to nominate a woman is such a glaring misstep that McCain should pounce and take advantage of it.

The ticket will nominally be Obama-Biden. But, to millions of American women it will be Obama and not Hillary.

Morris makes sense. The female vote will decide the 2008 election and there are plenty of disappointed women looking for any reason not to vote for the Democratic slate. A woman on the Republican ticket couldn't hurt. I don't know much about Sen. Hutchinson. Has anyone thought about Sen. Elizabeth Doyle as a VP selection for McCain?