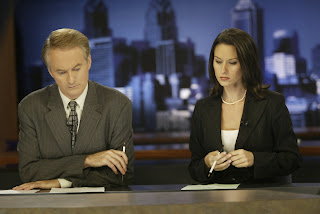 This is better than any soap opera on Channel 3.

Larry Mendte, who was recently fired from his anchor job at CBS3 in Philadelphia, admitted in court Friday that he illegally hacked into his co-anchor's e-mail accounts.

The co-anchor, Alycia Lane, was also fired from her job after she was involved in an altercation with a New York City policewoman.

Just when you thought that Mendte and Lane couldn't bring any more embarrassment to their former station, Mendte revealed Friday that he had a 'flirtatious and improper relationship' with Lane while the pair worked together.

It gets worse. Mendte is married to Dawn Stensland, a news anchor at rival FOX-29 in Philadelphia. Dawn Stensland found copies of e-mails that Mendte and Lane had exchanged when Stensland stopped by her hubby's office.

At a news conference Friday, Mendte said his actions grew out of a feud with Lane that began after he ended what he said was a flirtatious and improper relationship with her, including long dinners and late nights out together, the Associated Press reported.

Mendte issued a lengthy statement explaining why he hacked into Lane's e-mail account. (By the way, Lane's lawyer said the two never had a relationship of any sort other than working together.)

You can read the full text of Mendte's statement at www.philly.com

I think it is sad that Larry now that he's caught admits an improper relationship with Alicia. He is just trying to smear her again and I think it's disgusting. Alicia is way out of his league and for that matter so is his poor wife. He has already proven that he is the psycho here.