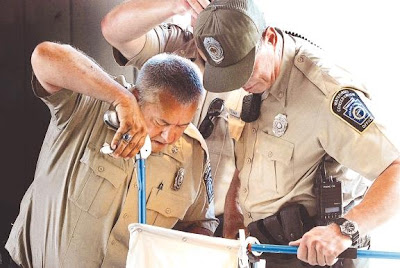 From a story by Brandie Kessler in today's edition of The Pottstown Mercury:

NORTH COVENTRY — A truck driver making a delivery stop in North Coventry Thursday morning got a slithery scare in the back of his trailer when he opened the doors and discovered a 3-foot snake cooped up inside.

"That's a first," said truck driver Steve Henry of finding the snake. Henry, of Ohio, who drove the semi carrying carpets to the Morgan Moving and Storage facility on Yarnell Road near River Road from Georgia, arriving before 11 a.m. Thursday, said he'd never previously found more than a mouse or a rat on a truck he was driving, including the times when he hauled trash in New England.

"Never in 27 years," Henry said when asked if he'd ever seen anything like the snake on a truck he was driving or heard about snakes on other drivers' trucks.

Read the full story and see more photos at the newspaper's Web site.