Rendell caught in another lie? 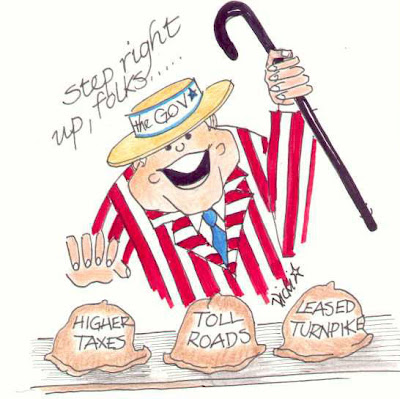 In order to drum up support for a $4.5 billion tax hike over the next three years, Rendell, aka Chicken Little, has been predicting the sky will fall over Pennsylvania if he doesn't get his way.

An early scare tactic about school boards having to raise your property taxes if the state doesn't raise your income taxes first has been exposed as a sham.

Funding for education has risen every year under Rendell and will go up again under a balanced budget adopted by the Republican-controlled Senate.

Another scare tactic was the closing of state parks if Rendell doesn't get his way, but that won't happen as the state's fiscal year ends today. Parks can remain open all summer under current funding levels.

Rendell's latest scare tactic is his best one yet. Rendell is now saying that he will have to eliminate 800 Pennsylvania state troopers -- that's 1 in 5 -- if he doesn't get his tax increase.

Columnist John Baer of the Philadelphia Daily News tried to get to the truth of Gov. Chicken Little's latest doom-and-gloom prediction, but didn't have much luck.

The administration says that the GOP would toss 800 troopers off the 4,400-member force, giving evildoers, drunken drivers and child-molesters free reign over Pennsylvania.

"The Senate's plan is reckless if not criminal," Rendell said in a recent statement. And at a news conference Friday, he said: "The only way to meet that [GOP budget] is with 800 layoffs."

Republicans say that Ed's dead wrong and using scare tactics to sell his plan to hike the personal-income tax (which Republicans oppose) to raise another $1.5 billion for the state.

"It's shameful," Republican Senate President Joe Scarnati said on statewide TV last week. "When you're selling snake oil, you really need to up the hype."

Senate GOP Leader Dominic Pileggi says that Rendell's read on this is "based on either a misunderstanding or a deliberate evasion" of facts.

But the facts aren't easy to find.

Especially when the governor is working overtime to fool everyone.