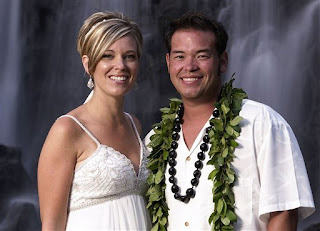 This isn't the kind of "reality" TLC had in mind when it gave the green light to a show about two young parents raising eight children, twins and sextuplets.

The happy couple have been living "separate and apart" for at least two years, Kate Gosselin says in divorce papers obtained by The Associated Press. So where's the reality, guys? You've been duping the American public for at least two years, even going as far as renewing your wedding vows in Hawaii last year. Jon and Kate should be nominated for an Emmy for their "performances" as real people.

Not that anyone's complaining. More than 10 million people tune in every week to watch Jon and Kate Gosselin and their eight kids. The couple has earned millions from the TV show and other marketing opportunities. Everyone's making money pretending to do a "reality" show.

The big news of the week is that Jon & Kate are getting divorced.

Reporter Keith Phucas, our man at the Montgomery County Courthouse in Norristown, has some of the details:

NORRISTOWN — The parents on one of television's best known reality shows — Jon and Kate Gosselin — filed for a no-fault divorce Monday in Montgomery County Court.

The Gosselins, who are featured in the TLC show "Jon & Kate Plus 8" with their eight children, created a media buzz when they let it be known they were having marital problems. The couple has been featured on tabloid magazine covers for months.

Kate Gosselin says in divorce papers that her marriage to Jon is "irretrievably broken." She says in court papers that she's willing to "negotiate a fair and reasonable" settlement with her husband of 10 years.

Now in its fifth season, the hit show has documented the Berk County family's semi-chaotic, day-to-day life, as Jon and Kate, and their occasional adult helpers, try to keep pace with their twins and sextuplets as they scurry around the house glancing off furniture, bouncing on beds and bumping into one other.

Though the couple lives in Berks County, they filed in Montgomery because the divorce lawyers practice here. Court records lists one of the attorneys as Cheryl L. Young, of Hangley, Aronchick Segal & Pudlin, in Norristown. A second lawyer is rumored to practice at the Elliot Greenleaf law firm in Blue Bell.

State residents can file divorce papers in any county they choose, according to David L. Ladov, a veteran divorce attorney with Cozen O'Connor.

"You can file for a divorce anywhere in Pennsylvania, as long as no one objects," Ladov said.

The Gosselins paid a $282.50 fee to file in Montgomery County. If they'd chosen Cameron County, the fee is only $50, he said.

"So for a quick, no-fault divorce, it's all done by mail," Ladov said, referring to the Cameron County option.

Also, the fact that divorce records are sealed in Montgomery County may have played into the couple's decision to file in Norristown.

In Berks County, divorce records are open for public inspection, according to an employee at the Berks County Prothonotary's Office.

The biggest losers appear to be the children, who have been exploited by the parents and television execs for ratings and a big pay day ... and then there's the American viewing public, which will watch anything on television.

TV viewers lost interest in the eight Gosselin children years ago. The show is really about a shrew of a wife and a hen-pecked husband. Now that they're getting divorced, what's the point of watching the show?

Read the full divorce story in Wednesday's edition of The Pottstown Mercury.

Who cares about these people? They and the sow from California decided to breed like insects and this entertains people. If your life is so deprived that you must follow reality shows for entertainment it is bullet eating time