Guide to political pork in PA 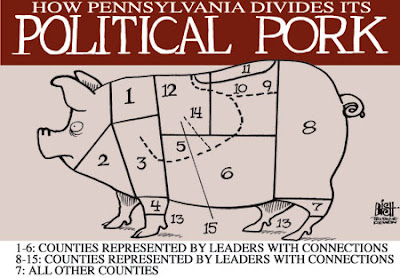 The Associated Press ran a three-part series this week in newspapers across the state about the pork spending by the Pennsylvania Legislature, the very same group of lawmakers who will soon have to decide if they should raise your taxes to continue funding irresponsible spending.

The Pittsburgh Tribune-Review couldn't help but notice that most of the spending took place in legislative districts held by legislative leaders. Funny how that works out.

Against the backdrop of Harrisburg seeking more of taxpayers' hard-earned money to cover up its continued profligacy come new details of a long-outrageous practice.

The Associated Press reports that "tens of millions of dollars that support Pennsylvania lawmakers' favorite causes are directed by legislative leaders through a secretive process that appears to benefit some of the leaders' constituents the most."