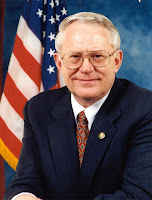 Rep. Joe Pitts, a Republican who represents Pennsylvania's 16th Congressional District, is a straight shooter, especially when it comes to looking out for the taxpayer.

Pitts is warning that Nancy Pelosi and Democrats are rushing the Waxman-Markey energy tax bill through the House before taxpayers can figure out how much it's going to cost them.

From a statement issued by Pitts:

"Every American should be gravely concerned about this legislation. Protecting the environment is extremely important, but we should do so wisely and carefully. This is reckless and extreme legislation that will hurt people who are already suffering and do significant damage to the American economy. It will drive manufacturing jobs out of the country to places like China. It will hurt American competitiveness in the world economy. Pennsylvania will be among the hardest hit states.

"The economics of this are simple: affordable energy is critical to prosperity. This legislation will make energy much more expensive. That translates to a less prosperous America with higher poverty rates, higher taxes, and a much bigger national debt. The right way to protect the environment is to make clean energy cheaper by encouraging proven sources of clean energy like wind, solar, and nuclear along with the development of cutting-edge technologies like plug-in hybrid cars and hydrogen fuel cells.

"I will be offering amendments to this bill in an attempt to limit its damage to the economy. However, I expect Democratic leaders to block votes on those amendments."

U.S. Rep. Pat Murphy voted for the Cap & Trade against the wishes of many voters in his district who wanted him to vote against this bill. How do enlightened democrats, independents, libertarians,and republicans (who are able to see over their anger at Bush's pro-amenesty and spending spree) take action to dump U.S. Rep. Pat Murphy for not listening to the will of the voters? Voter, Bucks County