What's so special about the Kennedys? 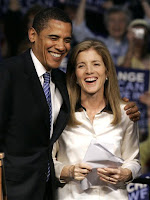 Do we have a democracy or a monarchy in this country?

What's so special about the Kennedys? Why do they feel entitled to another Senate seat?

Despite all the problems facing this country, "the political establishment is putting forth, as a U.S. Senator from New York, a person whose qualification is her last name," Viguerie said.

Viguerie, chairman of ConservativeHQ.com, said there are more qualified candidates to pick from.

Read the full comments by Viguerie at the link below:

How is it possible that the Liberal Nat Hentoff, Conservative Tony Phyrillas and astute comedian Fran (I don't have a snow balls chance in Hell) Dresher missed the boat. The decision was made months ago although with another NY Gov. at the time but with binding commitments.When the Life guard of Chappaquiddick went against his State's endorsement of Hillary and backed Obama. Follow the Vegas lines there is no bull when money is involved