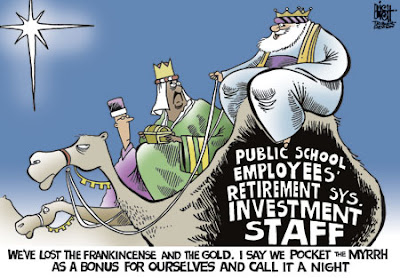 When people talk about the "culture of Harrisburg," it's not just corruption on the part of elected officials. It's a world view that it's OK to spend other people's money with impunity.

A perfect example is the recent revelation that the people who manage the state's teacher retirement funds were awarded $854,000 in bonuses even though the retirement fund lost $1.8 billion.

The Pittsburgh Tribune-Review is incredulous at this latest example of greed and stupidity.

From a Tribune-Review editorial:

Giving bonuses of more than $854,000 for the fiscal year to 21 investment staffers of the Pennsylvania Public School Employees' Retirement System -- a fund that lost $1.8 billion -- defies belief.