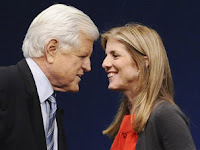 That statement by N.Y. state Rep. Peter King, a Republican would is considering a run for one of New York's U.S. Senate seats, sums up the disturbing trend of a handful of families holding political power in the United States.

While we have the Bush family on the Republican side, it's mostly a Democratic trend, with Clintons and Kennedys leading the way.

Politico, the online political Web site, examines what some find as a disturbing trend toward an aristocracy handing political power to offspring and relatives.

Hell, even Jesse Jackson managed to get his son elected to Congress.

From the article by Charles Mahtesian:

All told, it's entirely possible that the Senate will be comprised of nearly a dozen congressional offspring by the end of Obama's first term as president.

"It's a very interesting American phenomenon, even though there is a line in the Constitution that says no title of nobility may be granted by the United States," says Stephen Hess, a senior fellow emeritus at the Brookings Institution and the author of "America's Political Dynasties." "Given where we started, it's interesting that this has developed."

Almost everyone agrees that the high cost of elections is making the world's most exclusive club seem even more exclusive. According to some estimates, the cost of winning Clinton's New York Senate seat in the special election in 2010 and the general election in 2012 will be in the neighborhood of $70 million.

"It's an enormously expensive process to run for the United States Senate," added Edgar, who ran unsuccessfully for the Senate in 1986. "And once someone runs for a Senate seat, there is a sense of ownership."