'It's not a matter of luck' 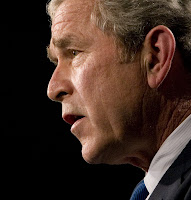 Nobody pays much attention to George W. Bush any more, but in a recent speech, the president addressed the inability of terrorists to carry out attacks on U.S. soil since Sept. 11, 2001.

"It's not a matter of luck," Bush said in a speech at the U.S. Army War College in Carlisle, Pa., that was largely ignored the mainstream media.

Only the committed Bush-haters can argue with that assessment. America's enemies were not planning a single attack. They fully anticipated launching more attacks after 9/11. What stopped them?

Investor's Business Daily gives Bush his due despite non-stop criticism from the far left.

"President Bush reminded us this week of our triumphs in the war on terror despite critics who sought to deny him the tools," the newspaper says in an editorial. "He's kept us safe since 9/11 and says luck had nothing to do with it."

The remarkable accomplishment of the Bush years is that the president kept us safe despite the Democratic Party opposing him every step of the way and the mainstream media aggressively trying to reveal U.S. strategy to the enemy.

From the IBD editorial:

Democrats fought the Patriot Act and surveillance of our enemies, as well as the interrogation of captured jihadists at Guantanamo. It was the interrogation of Abu Zubaydah, the first high-value detainee taken by the CIA in 2002 and Osama bin Laden's chief of operations, that led us to 9/11 accomplice Ramzi Binalshibh. Interrogations of both terrorists then led us to Khalid Sheikh Mohammed, the mastermind of 9/11.

Bush took the war to the enemy, deciding it was better to fight in the streets of Baghdad than Boston. Bush's efforts have won great victories and wrought huge changes in the Middle East, not the least of which have been the liberation of 50 million people in Iraq and Afghanistan.

His actions led to the establishment of democracy in two of the most brutal dictatorships on earth while routing al-Qaida in Iraq and pushing the Taliban from power in Afghanistan, sparing millions from torture, oppression and mass graves. Don't just fight the alligators, he figured, drain the swamp in which they thrive.

Bush's post-9/11 actions may have prevented many more devastating acts of terrorism, but we may never know. "While there's room for an honest and healthy debate about the decisions I made — and there's plenty of debate — there can be no debate about the results in keeping America safe," he said.

Critics should ask our terrorist foes how lucky they feel lately.