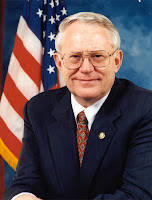 A guest column below from Congressman Joe Pitts, a Republican who represents Pennsylvania's 16th District. Liberals, unable to compete in the marketplace of ideas with conservatives on talk radio or cable television, want to enact the "Fairness Doctrine" to require equal time for their far-left views. Pitts does a nice job of explaining the "Fairness Doctrine" and arguing that it's a bad idea to have the government regulate political speech.

The Mistaken Quest for 'Fairness' in the Media

One of my colleagues on the House Energy and Commerce Committee, Rep. Anna Eshoo (D-CA), has added her name to the growing list of Congressional Democrats who have publicly called for the reinstatement of the Fairness Doctrine.

The so-called Fairness Doctrine was a Cold War relic first applied during the 1940s, when the only available broadcast media were a couple of stops on the radio dial. At the time, the Federal Communications Commission (FCC) enforced the Fairness Doctrine, which required radio journalists to provide equal time to opposing points. This subjective notion of equal time for opposing points of view often led broadcast journalists to steer clear of the most controversial issues of the day.

In 1985, the FCC made the determination that the Fairness Doctrine was no longer justified due to the "multiplicity of voices in the marketplace." In fact, when the Commission got rid of the Fairness Doctrine, its report included a comment that the doctrine "in operation, actually inhibit[ed] the presentation of controversial issues of public importance to the detriment of the public and in degradation of the editorial prerogative of broadcast journalists."

Yet, over the past several years, Congressional Democrats have started to go on record advocating for a comeback of this government censorship of media. I don’t think government telling journalists what they are allowed to say ever makes sense, but the Fairness Doctrine makes less sense in today’s media environment than ever before. The Internet, satellite radio, podcasts, and other new mediums have exponentially increased the number of viewpoints that can be heard.

The only possible motivation for wanting to bring back this misguided policy is to censor voices some Democrats in Congress don't like. The doctrine doesn't inherently favor one ideology over another, but some liberals are so eager to silence radio personalities like Rush Limbaugh and Sean Hannity that they want to force them to broadcast liberal ideas or get off the air. To date, this has been a marginal effort. Two years ago, a vote to bar the FCC from reviving the doctrine passed on a vote of 309 to 115. With proponents like House Speaker Nancy Pelosi and California Congresswoman Anna Eshoo, however, the idea may gain steam in the next Congress.

I don't believe government should tell journalists what to say, even though there are plenty of liberal media outlets out there that are critical of the ideas I and my conservative colleagues are advocating.

I am amazed that a group of politicians that so fervently backs the ACLU in their defense of civil liberties is signing up for a policy that would mandate that unelected, unaccountable government bureaucrats in Washington decide whether their local radio or television station is being "fair." This is a fundamental issue of the Constitutional right to free speech.

The American people love to engage in civic dialogue, especially as it pertains to the most pressing public policy issues. In a free market, fairness should be determined based upon equal opportunity, not equal results. Much of the ire of liberal politicians who wish to reinstate the Fairness Doctrine is focused on talk radio stations, where conservative hosts have built large followings of listeners. There is nothing preventing liberal ideas from being presented in the same forum, but the free market ought to decide whether shows of this nature are supported by a listening audience, not a government bureaucrat.

This is why I have supported the Broadcaster Freedom Act, a bill introduced by Rep. Mike Pence from Indiana. This legislation will prohibit the Federal Communications Commission from prescribing rules, regulations, or policies that will reinstate the requirement that broadcasters present opposing viewpoints in controversial issues of public importance. This legislation ensures true freedom and fairness will remain on our radio airwaves.

I genuinely believe that any effort to reinstate the Fairness Doctrine will be met with great resistance from the American people, who do not want the government to tell them what they can and cannot listen to.

However, for any of my Democratic colleagues in Congress who are still considering whether or not they would support such a policy, I would like to leave you with a quote from a fellow Democrat, John F. Kennedy, who stated, "We are not afraid to entrust the American people with unpleasant facts, foreign ideas, alien philosophies, and competitive values. For a nation that is afraid to let its people judge the truth and falsehood in an open market is a nation that is afraid of its people."