Palin vs. The Princess 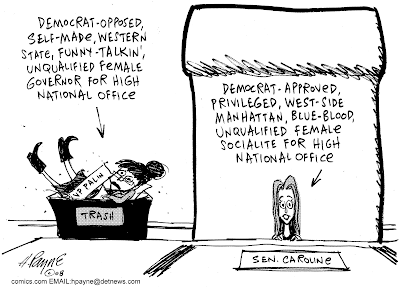 To listen to the likes of New York City's Mayor Bloomberg or School Chancellor Joel Klein, Caroline Kennedy is qualified to be New York Senator because she has raised her kids well, is bright, worked for Obama, cares about issues, is Ted Kennedy's niece, has new ideas and wants to get things done in Washington. I am disappointed that none of Caroline's supporters have mentioned her good dental habits. The bottom line, to no surprise, is that if you are conservative you are either a warmongering lunatic, an arrogant rich person, or a religious fanatic hick whose experience will be questioned at some level and in some way at every turn. If you are a favored liberal, of course, you are a noble saint out to right the wrongs, save the world and free the poor and voiceless from their bondage.

There are those who argue that there is a much lower standard of experience for Congress as compared to the Vice-Presidency and that fact is certainly reasonable. However, when any degree of experience is selectively bashed or praised depending on the candidate's political affiliation, the entire experience argument falls flat on its face and is revealed as simply so much political compost concealing the lowest disgust for the target’s political and social positions.

Read "Liberals, With Your Hypocrisy so Bright, Won’t You Prove My Point Tonight?" at Family Security Matters.