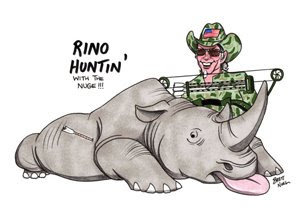 "There are really only four things I have a strong aversion to: unloaded guns, dull knives, banjos, and Republicans in Name Only (RINOs)," says Ted Nugent, rock guitar idol, hunter and conservative commentator.

Writing at HumanEvents.com, Nugent says it's time for the Republican Party to purge itself of so-called moderates who have turned their backs on basic GOP principles of limited government, strong national defense and lower taxes.

RINOs are Fedzilla punks who feign support for conservative principles only when it serves their political interest. RINOs are also known for their moderate positions such as supporting tax increases, federal "bailouts", "comprehensive immigration reform", advocating more counterproductive gun control that guarantee more innocent victims, opposing the death penalty, and growing and sustaining Fedzilla and all its toxic mongrels by going along with the liberals. RINOs have forgotten President Ronald Maximus Regan's admonition that government is the problem, not the solution.

Nugent says the 2008 presidential race is a clear repudiation of RINOs, including John McCain.

John McCain has been a RINO on campaign finance, immigration, global warming and other issues and look what happened to him. He had reached across the aisle so many times to cut deals with the liberals that he had to pick Governor Palin, a true conservative, to try and lure disenfranchised and disgusted conservatives back into the fold. Didn't work. Senator McCain was the wrong candidate at the right time. RINOs lose elections;
conservatives win them.

Read the full column at HumanEvents.com