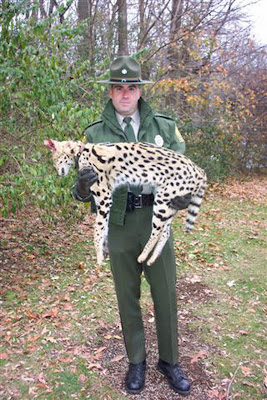 The Pennsylvania Game confirmed Wednesday that a serval, an exotic cat from Africa that resembles a small cheetah, was killed Nov. 25 in Willistown Township, Chester County, according to a PA Game Commission release.

Montgomery County Wildlife Conservation Officer Chris Heil received a call from a farm manager for the Chester County farm about an exotic cat that was in his chicken coop killing chickens, according to the Game Commission.

Under state law, the farmer had the authority to kill the animal to protect his livestock, the game commission release states.

Chester County Wildlife Conservation Officer Scott Frederick retrieved the carcass of the serval on Wednesday and transported it to the Southeast Region Office in Reading, Berks County, according to the Game Commission.

The owner of the animal has been identified and an investigation has been opened regarding the lawful ownership of the animal, according to the Game Commission.

The photo of Chester County Wildlife Conservation Officer Scott Frederick holding the carcass of the serval was taken by the Willistown Police Department.

Check the Pennsylvania Game Commission Web site for future updates on the case.

This is what the Honolulu Zoo Web site has to say about serval eating habits:

They are successful hunters and eat a wide variety of prey, which includes rodents, small ungulates, An animal with hooves. The ungulates are divided into two classes the even-toed ungulates such as the deer, giraffes and antelopes; and the odd-toed ungulates such as horses, zebras and rhinoceroses. birds, lizards, frogs and insects. Their success rate is high at about 50% (lions are about 30% successful). They are also well known in East Africa for raiding farmer's poultry. They require a fresh kill and will eat carrion Dead and decaying flesh. only under extreme circumstances.

If you'd like to find out more about people who keep servals and other exotic animals as pets, check out ExoticCats.com

Yeah, nevermind that a farmers livelyhood was at stake. He could have just grabbed it. Clearly this native to Ches. Co. animal has every right to be here and we're on his turf.