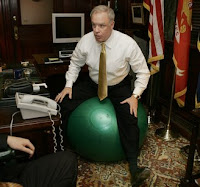 It looks like we won't have Bill DeWeese to kick around anymore.

The embattled House Democratic Majority leader is dropping out of the race for another two-year term as floor leader to avoid the embarrassment of having his own Caucus members show him the door.

Prominent House Democrats attempted a coup earlier this year to force DeWeese to resign as Majority Leader, but he held on to his post ... at least for a few more months.

DeWeese survived a scare at the polls on Nov. 4 when he managed to beat Greg Hopkins, an under-funded opponent by just 2,107 votes. (DeWeese actually lost to Hopkins in Greene County, the heart of the 50th House District.)

DeWeese ran the Democratic Caucus during the Bonusgate scandal, in which politicians allegedly used millions of taxpayer dollars to pay state employees for doing campaign work.

Although DeWeese is not one of the 12 people connected to the Democratic Caucus to face criminal charges so far and maintains his innocence, his chief of staff testified in court that DeWeese was aware of the diversion of taxpayer funds for political purposes.

The Bonusgate scandal, the lingering mistrust of Harrisburg lawmakers over the 2005 pay raise vote and the inability of DeWeese to get any major Democratic legislation passed in the House during the past two years sealed his fate.

Perhaps the Democrats can come up with a new title for DeWeese, like the Republicans did for John Perzel, the former Speaker of the House who was dethroned by his one party members after the pay raise fiasco and the GOP's loss of the House majority. Perzel became the "Speaker Emeritus" of the House after he lost the powerful Speaker post.

Maybe DeWeese can now be "Leader Emeritus" as the Democrats attempt to pick up the pieces left by their self-destructive leadership.

DeWeese's departure means that 3 of the 4 top Legislative leaders who pushed for the middle-of-the-night pay raise are no longer holding their leadership posts.

Joining DeWeese and Perzel in exile is Robert C. Jubelirer, the Senate Pro Tempore at the time of the July 2005 pay raise. Jubelirer was voted out of office in 2006.

For good measure, Senate GOP Majority Leader David Brightbill was also kicked out by voters. The only legislative leader who survived the purge is Robert Mellow, the Democratic Minority Leader in the Senate.