The Pope needs to brush up on Christianity 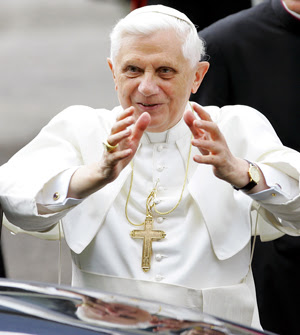 Things must be slow around the Vatican these days. Pope Benedict XVI has decided to stir up a hornet's nest by insulting a few hundred million of his fellow Christians.

The Pope recently used the term "defects" to describe every Christian denomination other than his own Roman Catholicism.

Unlike his predecessor, Pope John Paul II, who devoted much of his time trying to unite various branches of Christianity, Pope Benedict XVI decided to reopen some old wounds — and pour some salt into them.

If you're a member of the numerous Protestant or Eastern Orthodox denominations around the world, consider yourself warned. The Pope thinks Orthodox churches are "defective" and that other Christian denominations are not true churches. Makes you want to stay home on Sunday, doesn't it? If the former Cardinal Joseph Alois Ratzinger says you don't belong to a true church, what's the point of getting dressed up for Sunday services?

The heart of the problem is this infallibility business. The Pope is supposed to be "infallible." I could be wrong, but I'm pretty sure the only person who ever lived who should be considered "infallible" is Jesus Christ.

Two years ago, before he was elected pope, Cardinal Ratzinger wasn't infallible. Today he is. How does one become infallible overnight? And why did it take four ballots for Ratzinger to win the election for pope? And we won't even go into Joseph Ratzinger's past in Germany where he was a member of the Hitler Youth.

I don't have little white cap or the keys to the Pope-mobile, but I did some research and I think the Pope is a bit hazy in his church history.

It appears that it's the Roman Catholic Church that is an offshoot of the original Christian church. Shouldn't the Catholic Church be at the top of the pope's "defects" list.

For the benefit of Pope Benedict XVI, here's a little history that could help clear up his holiness' confusion about Christianity.

The Christian church came into existence on the Day of Pentecost in Jerusalem in 33 A.D. — 50 days after the resurrection of Jesus Christ. For the next 1,000 years, there was one Christian Church — the one that was persecuted by the Romans until the Emperor Constantine the Great converted to Christianity, which eventually became the state religion.

As the Roman empire grew, the center of church authority began to splinter into rival factions, one centered in Constantinople (still the home base of the Orthodox Church) and the other based in Rome (eventually becoming Vatican City), where popes rule the Catholic Church.

His All Holiness Bartholomew I, Archbishop of Constantinople, New Rome and Ecumenical Patriarch, is the 270th successor of the 2,000 year-old Christian Church founded by St. Andrew. (In contrast, Pope Benedict XVI is the 265th reigning pope.)

Bartholomew is the "first among equals" of the Orthodox Primates, who govern their respective churches in Greece, Cyprus, Russia, eastern Europe, Africa and North and South America.

Since the Great Schism of 1054, the Roman Catholic Church has splintered into numerous other denominations:
Religious observers say the Pope's pronouncement last week that if you're not Catholic, you don't count had more to do with internal church politics inside the Vatican than anything else. But why should the Pope be concerned with church politics? He's got a job for life.

The Church of Jesus Christ of Latter-day Saints (known as Mormon Church) was founded in 1830 rather than 1829, and claims to be a restoration of the ancient Church founded by Jesus Christ. It isn't a splinter of either Romanism or Protestantism.

The heart of the problem is this infallibility business.>

The heart of the problem is religion itself and all its minions that constantly claim that their fantasy about an imaginary friend in the sky is true while everyone else's fantasy is false. Humanity would be a lot better off without religion and the people willing to insult, kill, and die for the religious brand of their choice.

Tony you as have everyone else misread the Popes comments. His point We are the truest faith, so other's are less true but that does not exclude other religions from heaven. Some theologins known as Plurlaist belive all religions provide the path the heaven, but that is wrong the chruch believes that the ony way to salvation is through Jesus, but being jesus he has the power to allow people who never heard of him to enter heaven. The grace of God has inspired people such as Aristotle and Virgil to lead people to good lives. God's grace also allows people whoes religions is based on heritics such Luther, to become good men without the aide of all 7 sacraments and attain salvation. and vatican II even clearly staes that Jews are saved and B16 subsribes to it.

Your view of history is wrong, first itis profoundly anti catholic to call the pope a member of the Nazi Youth, he was forced to do so and abandoned the group when he left.
Secoundly the Church began with St. Peter who was crucified upside down in Rome.

I don't recall St. Peter ever being referred to as Pope Peter until after the Catholic church split from the Christian church in 1054 and retroactively made Peter its first pope in an attempt to legitimize its roots to the apostles.

You NEED to study your history, the Church was not founded when Saint Peter was cricified upside down, what are you a moron?? The Church was founded on Pentecost, 10 days after Christ Ascension into the Heavens.

@James, I would have to agree with much of what Bill Fitz had to say. You misread...He did not say that the church was founded when Peter was crucified upside down. "who was crucified upside down" is a relative clause, clarifying peter. Bill Fitz probably would agree with you. Yes the church was birthed on Petacost, through the leadership of Peter, who gave the first post resurrection sermon.