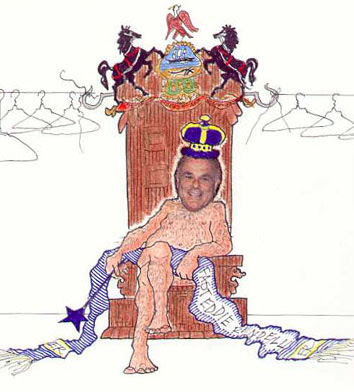 For the fifth year in a row under the reign of Emperor Edward Rendell I, Pennsylvania begins a new fiscal year without a budget.

The state Constitution requires the adoption of a budget by midnight June 30, but it wouldn't be the first time the governor and Legislature have ignored the Constitution.

The deadline came and went but the Legislature failed to reach agreement on a $27 billion spending plan for the 2007-08 fiscal year.

If you want my opinion, the fault lies squarely on the broad shoulders of Gov. Rendell and the puppets in the House who dance to Rendell's tune of more spending and higher taxes.

Did you catch Rendell's Academy Award-winning performance during that Saturday night press conference when it became clear that the GOP Senate had called His Majesty's bluff?

Don't you think it was a bit disingenuous of Rendell to complain about the Senate and House missing the June 30 budget deadline when Rendell himself scoffed at the deadline a few days ago?

"I missed four budget deadlines and got re-elected with 61 percent of the vote," Rendell told reporters Thursday. "The people who care most about whether this [budget] gets done by June 30 are the people who inhabit this building."

Here's a simplified version of what went down Saturday night as the budget talks broke down.

Let's begin by talking about "hostages." That was a term Rendell and members of the House used often during the days leading up to the budget deadline.

Here's the problem with taking hostages. Unless you're willing to play out the scenario and harm the hostages to get your demands met, making threats doesn't work.

According to Senate leaders, the Senate approved its version of the budget on June 20 by a 49-1 margin. That $27 billion budget was very similar to what Rendell proposed (but without any tax increases). The key ingredient here is NO NEW TAXES.

That's the message Rendell and House Democrats can't seem to grasp. While the governor has put aside most of his demands for seven new or expanded taxes, Rendell is still pushing an electricity tax and a trash tax. Again, the Senate is saying NO NEW TAXES.

Saturday night, the Senate voted 29 to 19 to stick to its NO NEW TAXES budget.

Later that night, the House voted 102 to 96 not to concur with the Senate version of the budget. (Only two Republicans voted with the 100 lockstep Democrats to hold up the budget.)

After four years of tax hikes and massive spending increases, Rendell has hit a wall in a united Republican Senate. (Rendell allies Bob Jubelirer and Chip Brightbill are no longer around to carry the governor's water in the Senate).

Senate Republicans have told Rendell repeatedly that they will not approve any taxes as part of the budget. NO means NO. No electricity tax. No increases in trash fees. No blank checks for corrupt and inefficient mass transit systems.

Until the governor gets it through his head that the state has to start living within its means, we're in for a long summer.

(Thanks to Mount Penn artist Vickie Rhodier for the encore presentation of Emperor Rendell above.)