Has it been 2 years since the pay raise? 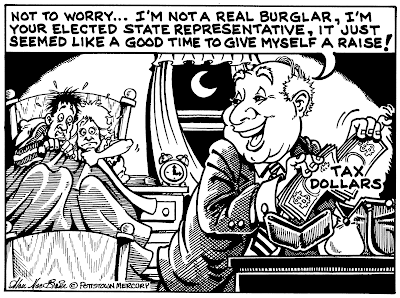 You know what I'm talking about.

On July 7, 2005, while most Pennsylvania residents were asleep, members of the Pennsylvania Legislature raided the state treasury at 2 a.m. in what would be known as the Payjacking of 2005.

Lawmakers gave themselves pay raises of up to 16 percent to 54 percent, and in a clear violation of the state Constitution, took the money right away as "unvouchered expenses." (The pay raise vote in the House was 119-79. The pay raise passed the Senate by a 27-23 margin.)

I would be remiss to let the two-year anniversary of the pay raise pass by without a few comments.

Some of the architects of the payjacking paid for their crime. Bob Jubelirer and Chip Brightbill, the Republican leaders of the state Senate, were tossed out by the voters in May 2006. Mike Veon, the No. 2 Democratic leader in the House, was ousted in November 2006. Republican Speaker of the House John Perzel was demoted to the title of "Speaker Emeritus" when his own party members turned against him. (It didn't help that Perzel lost control of the House after 12 years in GOP hands.)

But others who orchestrated the pay grab avoided paying a political price. The man who signed the payjacking into law, Gov. Ed Rendell, was re-elected to a second term in a landslide against Lynn Swann. (Although you could argue that Rendell's current troubles getting what he wants in the state budget are a result of lost political clout because of the pay raise.)

Rep. Bill DeWeese remains majority leader in the House. Sen. Bob Mellow continues as minority leader in the state Senate. More than 100 Legislators who voted for the pay raise won re-election last year. (At least 32 lawmakers still refuse to return the money they took from us in 2005, according to citizen activists.)

But let's look on the bright side. Many of the Legislative payjackers were brought to justice. Fifty-five professional politicians were forced into retirement or tossed out by the voters in 2006. Two Pennsylvania Supreme Court justices who were on the court when the payjacking took place were also dispatched. Russel Nigro lost his retention vote in November 2005 and Sandra Schultz Newman, who narrowly won her retention vote, gave up her seat months later. Voters will have a chance this November to remove a third member of the Supreme Court when Justice Saylor seeks retention.

And I guarantee you that Chief Justice Ralph J. Cappy will "retire" instead of facing the voters for his retention vote in 2009.

Another positive result of the payjacking is the reform movement. Thanks to pressure from citizen activists, bloggers and newspapers, the Legislature spent most of 2007 talking about reform and should pass many of the reform initiatives that good government advocates have been seeking for years.

And let's not forget that half the Senate, including prominent payjackers like Mike O'Pake, the minority whip, will face the voters in 2008. It's the first time 25 Senators will go before the voters since the payjacking.

Expect more incumbents to face the wrath of the voters, especially since they have failed to keep their promise to deliver property tax reform.