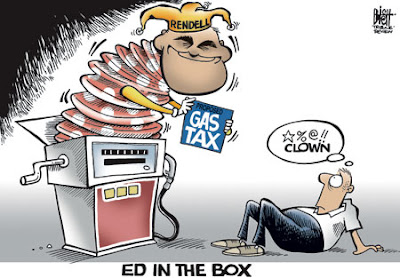 After six years of fumbling around to find a way to pay for fixing Pennsylvania's crumbling roads and bridges and subsidizing mass transit, the Rendell administration may fall back on its favorite option: Raising taxes.

Rendell's plan to make Interstate 80 a toll road was rejected by the federal government. His backup plan, lease the Pennsylvania Turnpike to a Spanish firm, has met stiff resistance in the state Legislature.

So what's a tax-and-spend career politician to do? Raise the gas tax, of course.

Pennsylvania residents already pay 32.5 cents per gallon, one of the highest tax rates in the country. Rendell said the gas tax would have to go up at least 10 cents a gallon to raise enough money to fund transportation needs.

"To make up the shortfall, we're looking at a gas tax increase," Rendell spokesman Chuck Ardo told The Pittsburgh Tribune-Review. "Where else are we going to find the money for the shortfall in transportation funding?"

Republican lawmakers say the state can find the money in its existing revenues to repair roads and bridges and fund mass transit.

State spending has increased nearly $8 billion since Rendell became governor in 2003, but little of that money has been used for transportation.

Read more about Rendell's gas tax plans in today's edition of The Tribune-Review.