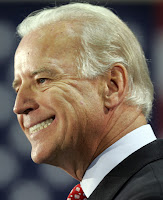 "When the stock market crashed, Franklin D. Roosevelt got on the television and didn't just talk about the, you know, the princes of greed. He said, 'Look, here's what happened.'"

There's so much wrong with those two sentences, I just don't know where to begin.

OK, let's start with the stock market crash. It happened in October 1929, four years before Franklin D. Roosevelt took office. The president at the time was Herbert Hoover.

Regardless of who was in the White House at the time, it would have been impossible for the president to address the nation "on television" because television wasn't introduced until 10 years later and didn't find its way into most American homes for another 25 years.

Radio was the medium of mass communication at the time. I guess Sen. Biden, 65, doesn't remember those "fireside chats" FDR held during his years in the White House.

So Sen. Biden didn't know who the president was during the stock market crash and he didn't know that TV would not be introduced until 1939. What else doesn't he know?

This guy is supposed to be the smartest man in the Senate? That doesn't say much for the rest of the Senate, does it?

And the Democrats have the nerve to make fun of Sarah Palin.

imagine if Palin or McCain would have said this ; MSNBC would have spewed this constantly for a week, nonstop,about a how inept they are to run this country, when Biden
can not get his facts straight...
go figure!!!