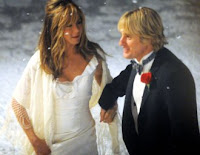 Jennifer Aniston and Owen Wilson are among the big-name stars filming "Marley & Me" in West Chester.

Based on the memoir of Philadelphia Inquirer columnist John Grogan and his yellow Labrador retriever, Marley, the film is scheduled for a Christmas release by 20th Century Fox. Other cast members include Alan Arkin and Eric Dane.

For an exclusive slide show (18 photos) of the filming, visit The Mercury's Web site.

And did you know Jennifer Aniston spent some of her childhood in Delaware County, where she still has relatives?