Fast Eddie needs to slow down on Turnpike lease 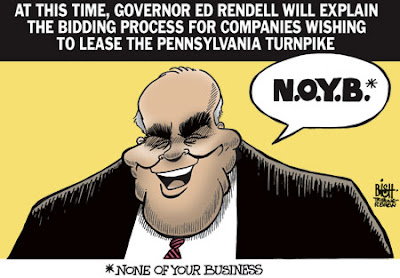 If we haven't learned a lesson yet after five years of Ed Rendell as governor, we might as well disband our state government and make Rendell "King of Pennsylvania."

When he wants something done fast, it usually means bad news for Pennsylvanians.

Case in point, the casino slots bill that was rushed through the Legislature in July 2004. The Legislature is still trying to fix all the problems with the bill four years later.

And let's not forget the pay raise bill that Rendell pushed through the Legislature in July 2005. The lawsuit filed this week by the League of Women Voters shows us that we still don't know the full nature of the closed-door meetings that may have compromised all three branches of state government.

So now we have Rendell's plan to turn over operation of the Pennsylvania Turnpike for the next 75 years to a Spanish company. Rendell says the $12.8 billion bid is a "slam dunk" and the Legislature should sign off on it in the next few weeks.

The Pittsburgh Tribune-Review has an editorial today titled, "The turnpike bid: Whoa! Slow down!"

The Legislature should follow the newspaper's advice. The last thing this state needs is to jump into another of Rendell's questionable schemes with eyes wide shut.

A private company isn't going to give Pennsylvania $12 billion unless it can make a lot more for its bottom line. The only way to make more money and return its $12 billion investment to shareholders is to raise tolls and cut back on employees. The days are numbered for many Turnpike workers should this lease deal go through.